Forum – the Three Ballot Questions for 2018 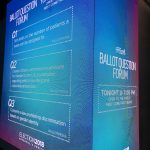 The Haverhill Democratic City Committee (HDCC) presented Ballot Breakdown, a discussion forum on the three ballot questions for the November 6 general election. The forum took place at Haverhill’s HC Media Center in Harbor Place on October 25.  Speakers discussed the Yes and No vote on Question 1 (nurse/patient staffing ratio), and one speaker each spoke for a Yes vote on Ballot Questions 2 (initiative to add a constitutional amendment limiting money in politics) and 3 (keeping a Massachusetts law protecting the rights of transgender people).  The Massachusetts Democratic Party has endorsed Yes votes on Ballot Questions 2 and 3.

Before each ballot question discussion, Bill Cox, Chair of the HDCC, read each ballot measure in full. After each presenter spoke, members of the audience asked questions. 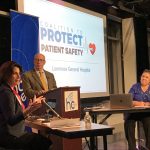 This was the only ballot discussion in which both pro and con speakers were present. Speaking first for Yes on Question 1, the Nurse-Patient Assignment Limit Initiative,  was Mary Sue Howlett, Associate Director, Division of Nursing, Massachusetts Nurses Association,  who presented the argument for voting Yes. She described the situation Massachusetts nurses face today, past attempts at improving nurse/patient ratios, and California’s experience, which enacted safe patient limits in 2004. She outlined how patient safety and care by hospitals and nursing would improve if Massachusetts voters approve this measure. For more information on voting Yes on Question 1, see this webpage.

Speaking for No on Question 1 side was Karen Moore, VP for Nursing Operations at Lawrence General Hospital. She outlined the possible difficulties hospitals will face if the law is enacted. She then made her own comparisons to California, saying that Massachusetts hospitals already outperform California hospitals in many ways, including emergency room wait times. Moore finally explored the potential negative financial impact of the law. For more information on voting No on Question 1, see this webpage. 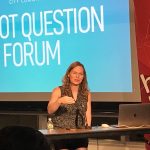 Speaking for voting Yes on Question 2 was Alexandra Chandler, former congressional candidate for the Massachusetts Third District.  Voting Yes on Question 2 would establish a 15-member citizens’ state commission to study amending the constitution to regulate money in politics and negate corporate personhood. Chandler explained that the commission would look at how money in politics is approached in other countries, bring a diverse perspective to the problem, and produce a durable proposal to influence the national conversation.

Chandler concluded by explaining what we can achieve by limiting money in politics. Now, only issues financed by special interests are addressed by lawmakers, while issues like student loan debt, which don’t have a powerful lobby, are not addressed. It will also increase the diversity of people running for elected office. Finally, it will help elected officials focus on what’s important to their constituents: now, candidates often spend as much as 4-6 hours a day fundraising, and it distorts their perception. 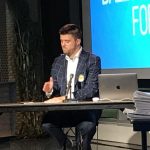 Nicholas Golden, former Eagle-Tribune reporter, spoke in favor of voting Yes on Question 3. Two years ago, Massachusetts passed an anti-discrimination measure to protect transgender rights. A Yes vote will keep this anti-discrimination measure in place; a No vote will repeal it, removing protection for transgender people. Golden pointed out that the ballot measure as written is very confusing, so you must know ahead of time how you’re going to vote.

Golden shared statistics from public-watch organizations like police, mayor, sexual assault, and domestic violence organizations that proved that this law does not cause an increase in crime – there have been no public safety issues because of this law. The No on 3 campaign wants you to believe the opposite, but their campaign is not based in fact and has no supporting data.

Yes on Question 3 has numerous endorsements, including Charlie Baker, the Massachusetts Teacher’s Association, and The Boston Globe. The bottom line, says Golden, is that a No vote takes people’s rights away, so vote Yes on 3. For more information on voting Yes on 3, please follow this link.

On the federal level, there is an extremely helpful resource for tracking the legislative activity of our individual federally elected officials. Click here for www.congress.gov.

Want to get active but have limited free time? Click here to check out the 5 minute actions you can do.